This weekend has been what a weekend for me is all about…..my family and really good food. As I type I can smell the coffee beans that I have just ground and hear the hiss of my espresso pot on the stove, these are such warming, comforting smells and sounds. For me coffee is the one that satisfies everything and rounds it all off after a good meal. Todays weather is neither here nor there so best medicine on a day like this is to strike up the BBQ and have a lazy cooking day. This I did with my take on Portuguese Prego Rolls.

A few years ago when our twins were small, I had a Portuguese Au Pair. Ana fast became one of our family and we still consider her so. She loved to watch me cook and I will always treasure the memories of me teaching her how to cook. You see when she arrived at first she took a very strong stance and made it clear that cooking was not for her….she loved to iron…she hated to cook BUT months of influence wore her down and slowly she started to ask questions and then watch and eventually inch ever closer to see what I was doing. I will never forget the day she left, I drove her to the airport, I held the tears back on the way there and I cried solidly all the way home. Not only did she leave with a stack load of my recipes but also with a big piece of our hearts. The hi-light when I did get home was that Vincent had a BBQ going for me and a bottle of red open, he knew how sad I would be and knew what would soothe.

A few weeks ago Ana messaged me to tell me that although she had done her years at Law school and because the economy in Portugal isn’t doing great, she has decided to go and study Culinary Arts and wanted to thank me for being her inspiration. I am chuffed!!! Today I cooked something I always cooked for Ana to make her feel at home…my version of Portuguese street food or fast food called Prego! Whenever we have this even after all these years I still miss her. This one is for you Ana. X

This recipe is taken from ‘Piri Piri Starfish’ by Tessa Kiros. Instead of slices of beef I used one big piece of sirlion as you would for roasting. I smoked it on our BBQ and 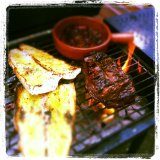 cook it until medium rare. I top the sliced steak with fried onions and mushrooms and soak the baguette ( I use this as we don’t have the soft rolls ) in the resting juices. You can try either method of cooking because I have also done it as below topped with a soft fried egg!

1) Marinate the steaks in the wine, one of the cloves of garlic and bay leaves for at least four hours before you cook them. 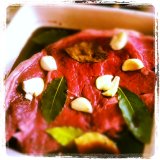 2) Heat the butter with the other garlic clove in a small pan until the butter turns a bit golden. Season lightly with salt and pepper.

3) Shake the meat out of it’s marinade and pat dry with kitchen paper. Heat the olive oil over a high heat in a non-stick frying pan that will fit the steaks. When the pan is very hot add the meat and fry very quickly turning once. Remove to a plate, keep warm and add a dash of salt to the meat while resting. Meanwhile put the halved rolls under the grill until very slightly crisp and warm.

4) Pour the meat marinade into the pan and let it bubble up well. When it has thickened a bit and tastes good, dip the cut sides of the rolls in to soak up some sauce. Put the bottom half of the roll on a plate, blob some garlic butter on and then the steak. Pour on any juices from the steaks when they were resting and scatter with a drizzle of piri piri sauce. Put the top on the rolls, squash together and serve at once with a bottle of piri pirir sauce so everyone can do their own thing!